In the Visual Physiology and Neurobotics Laboratory (VPNL), we study how the brain processes visual information. Consider a human catching a ball, a dog leaping at a Frisbee or a dragonfly hunting prey amidst a swarm. Brains large and small evolved the ability to predictively, focus attention on a moving target, whilst ignoring distracters and background clutter. We use electrophysiological techniques to investigate how flying insects see the world and build autonomous robots that emulate these neuronal principles. 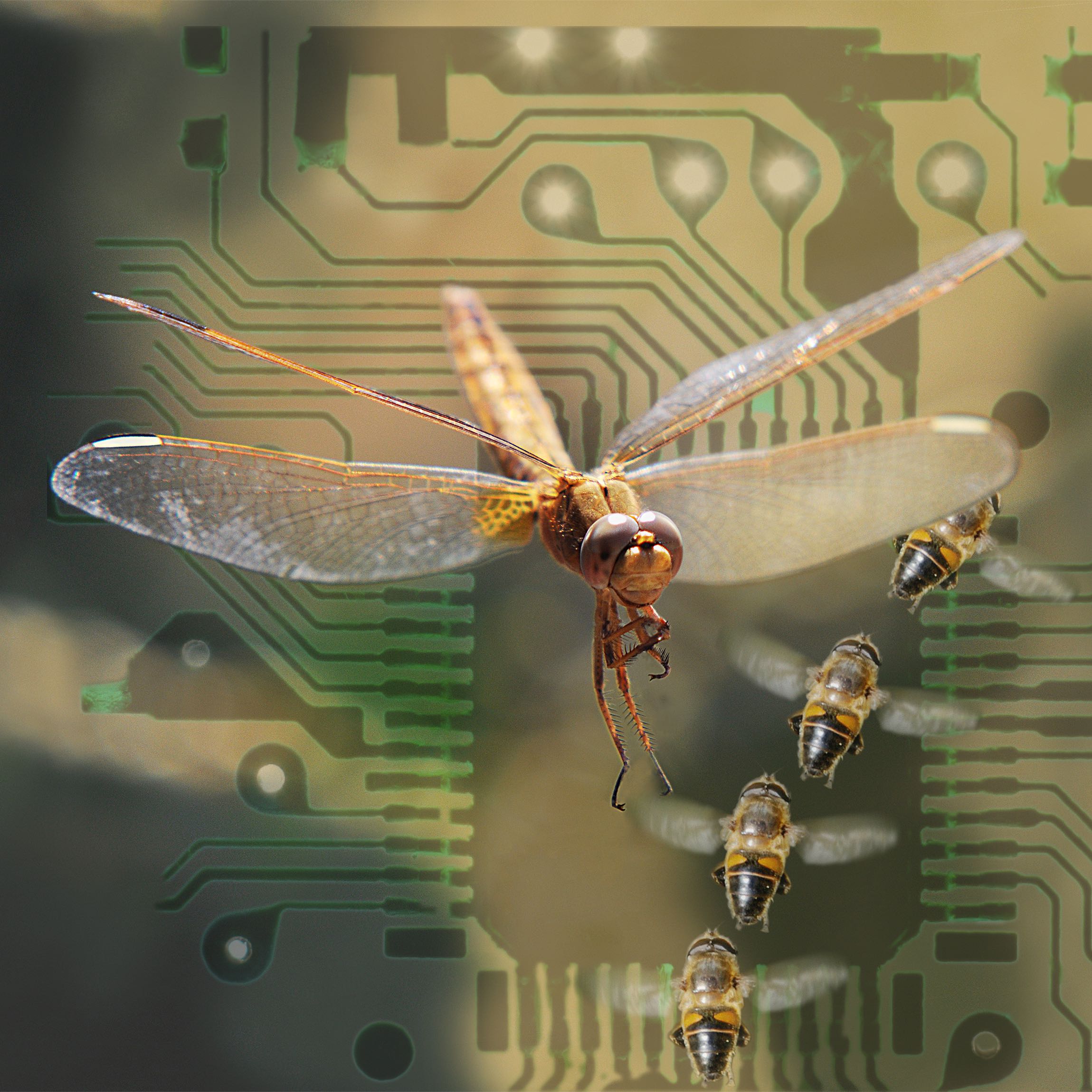 Insects have evolved a relatively simple and efficient solution to a task that challenges the most sophisticated robotic vision systems – the detection, selection and pursuit of moving features in cluttered environments. 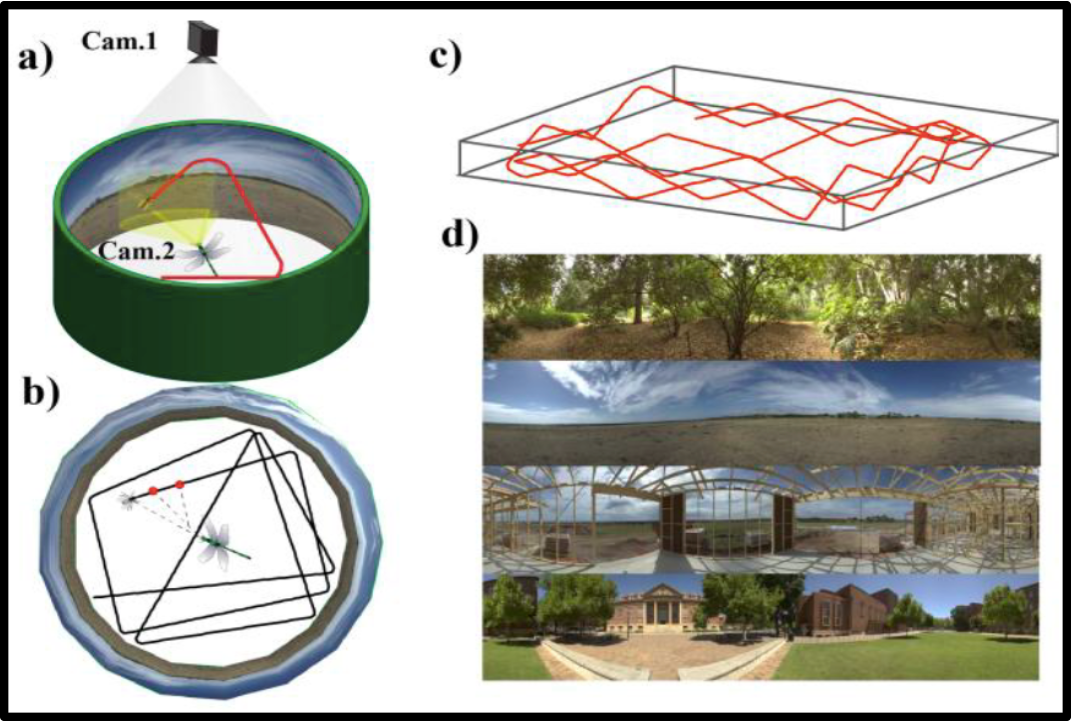 Research Project: Target-detecting neurons in the dragonfly. We study a set of neurons from the brain of insects that achieve this visual target-detection task in spectacular fashion. Our most recent work suggests that the insects use sophisticated mechanisms of attention similar to those in primates, to aid in the selection of one feature even in the presence of distracters (e.g. feeding in a swarm).
How do dragonfly target-detecting neurons discriminate moving targets amidst visual clutter whilst in closed-loop pursuit?
How do neuronal responses enable ‘prediction coding’ (estimating target trajectories) and ‘selective attention’ (selecting one target amidst distracters)? In this project, we are applying pharmacological agents and conducting immunohistochemistry to investigate the cellular mechanisms that underlie these properties observed in target-detecting neurons. This project is suitable for Masters and PhD students, however we also have contributing projects for 3rd year and Honours students, for example, examining the effect of individual pharmacological agents on earlier visual processing pathways. 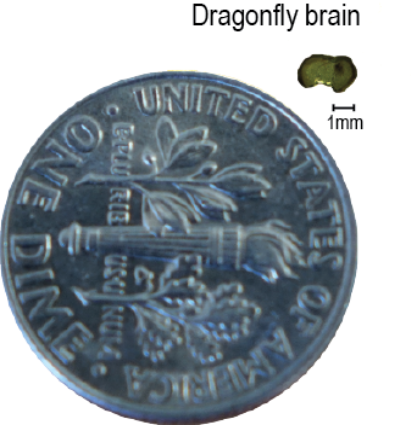 Research Project: Optic-flow neurons in the dragonfly. We recently discovered a set of neurons in the dragonfly optic lobes that respond to wide-field motion stimuli.  Unlike their fly counterparts, these dragonfly visual neurons use adaptive processes to allow them to encode different velocity ranges. This likely underlies their ability to hover near stationary, yet pursue prey at speeds over 60 km/hr. In this project, we will use electrophysiological techniques to record from optic flow neurons and discover how they are able to respond to diverse visual stimuli in such a remarkable manner. This project is suitable for Masters and PhD students.

Research Project: Computational Modeling. Combining electrophysiological experiments with computational modeling permits us to address important question in neuroscience. We have projects modeling target and optic-flow neurons more suited to students with a computational background.  Students can tailor their projects to include both wet and dry neurosciences. We have variants of these projects that are suitable for Honours, Masters and PhD students. We also host Engineering students in our laboratory to conduct projects in this field of research. 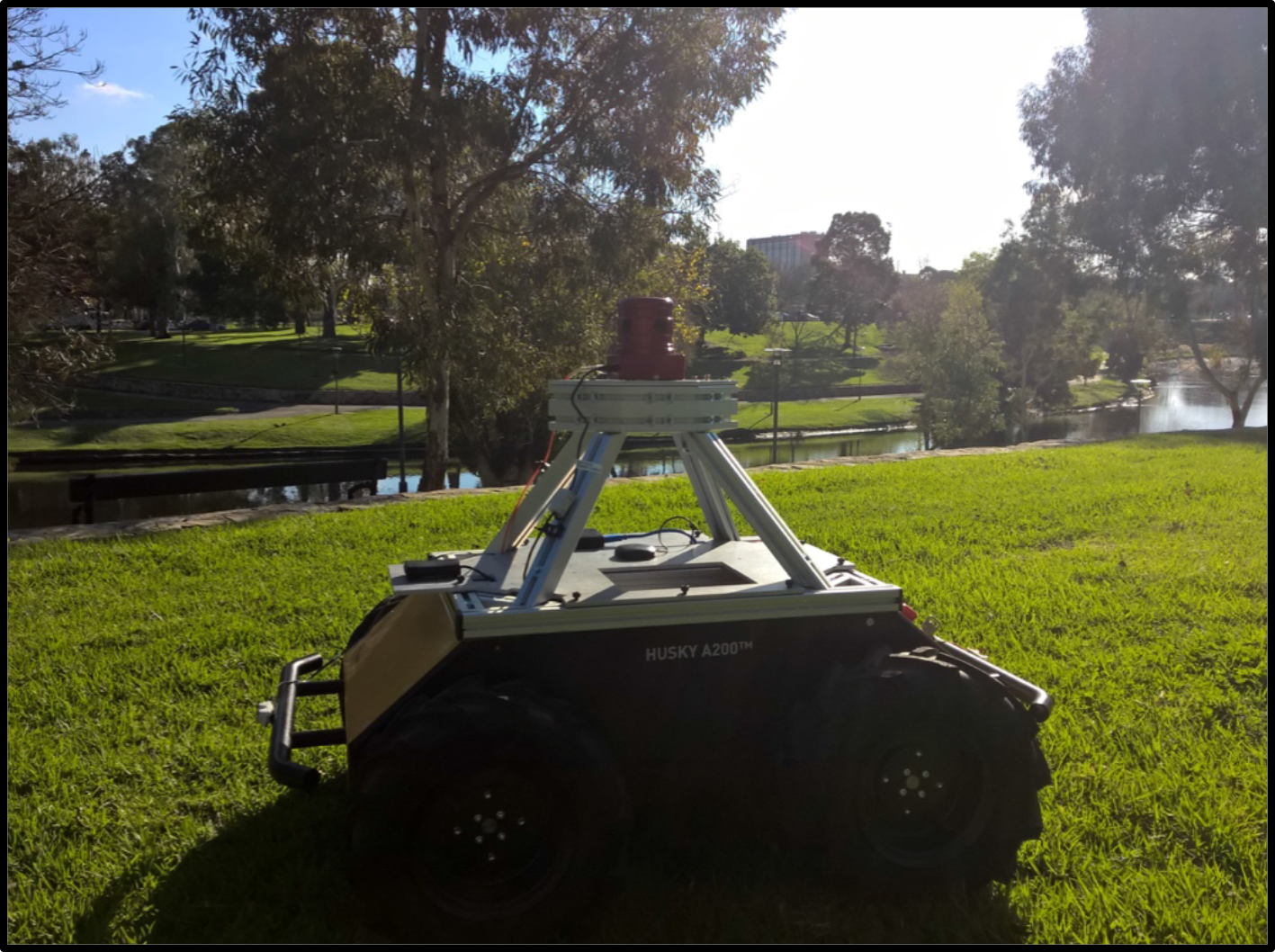 Research Project: Neurobotics: The physiological data obtained in our laboratory feeds into our robotics projects, as we implement neuronal processing onto an autonomous platform. This research involves computational modelling and hardware development, and is therefore suited to those with mathematical or engineering backgrounds. We work with collaborators in both Mechanical Engineering, Electrical Engineering and Computer Scineces on jointly supervised projects.

Research Project: Neuro-inspired Deep Learning: In collaboration with Computer Sciences, we are working on developing novel deep learning networks, suitable for the task of visual feature discrimination. These Defence funded projects for Honours, Masters and PhD students have special requirements, such as Australian Citizenship. Additional top-up scholarships may apply in some conditions.

Research Project: Nanoscale Biophotonics: We are investigating the in vivo application of fluorescent nanoparticles for the purpose of recording neuronal function in behaving organisms. This research combines life and physical sciences as we explore properties of the nanoparticles, the tapering of optical fibers and their interaction with nervous tissue. Additionally, we are developing optical sensing and stimulating tethers composed of new fibre optic bundles that will be applied to our in vivo model system. These projects are part of the ARC Centre for Nanoscale BioPhotonics and is in collaboration with the Institute for Photonics and Advanced Sensing (IPAS).