I am a HDR student in the Visual Physiology and Neurobotics Laboratory at Adelaide Medical School, the University of Adelaide, under Dr. Steven Wiederman and Prof. David O'Carroll (Lund University, Department of Biology). My current research is focused on elucidating mechanisms of Selective Attention in the Dragonfly, Hemicordulia tau, by using a combination of in vivo electrophysiology and immunohistochemistry, but my broader research interests span animal behaviour at all levels of analysis, from Sensory Ecology to Neuroethology, as well as wildlife conservation, taxonomy, ecology. I am particularly interested in tying fundamental mechanisms of neuronal computation to understanding behaviour via a mechanistic understanding of how neural networks implement information processing and, ultimately, result in perceptual, cognitive, and behavioural outcomes.

An Electrophysiological investigation of Selective Attention in an Insect Target Detection Neuron.

The ability to pay attention to task or survival relevant stimuli while ignoring distractions is a fundamental component of daily life, whether you are a person driving to work or an insect hunting prey while avoiding predators. Despite this, the biological mechanisms of attention are poorly understood. This project aims to uncover the mechanisms of attention in a model system that displays attention at the cellular scale, the Small Target Motion Detector system in Dragonflies and other flying insects. Specifically, I hope to gain an understanding of the mechanisms used to select what visual features are attended. By exploring the parameters and mechanisms of attention in a simple model system, we hope to gain a deeper understanding of attention that can be applied to more complex examples, such as humans, and inform robotic development.

Imagine you are a male dragonfly, cruising the banks of a river during summer. On the far bank, you spot another male in your territory. In order to engage and chase away this intruder, you must be able to visually track the intruder whilst ignoring distractions – other insects, water birds, or the movement of reeds.

The ability to respond to task-related stimuli while ignoring equally or more salient stimuli is known as selective attention and is a fundamental requirement for interacting with a complex visual world that is observed across species.

I study Selective Attention in an identified of dragonfly neuron known as Centrifugal Small Target Detector 1 (CSTMD1). CSTMD1 responds to small (1-3 degree) moving targets within a hemispheric receptive field. By inserting a small electrode through the cell membrane, I am able to record the electrical potential of the cell as it generates 'action potentials' (spikes), resulting in a window into the information processing and communication of the neuron in the neurons' own language - Spikes.

When two targets are presented simultaneously, CSTMD1 is able to selectively respond to only one whilst completely ignoring the other - selective attention. The strength of selective attention seen in CSTMD1 - the complete attenuation of the response to ignored features - is in stark contrast to findings in non-human primates and other mammals where attention results in a 'weighted average' response.

Identification of attended target in CSTMD1 - How do you tell what a Dragonfly is attending to?

The challenge of studying attention in non-human animals is that it can be difficult to determine the object being attended, especially if the nature of the research technique requires the animal be restrained to prevent behavioral response, such as in electrophysiological recording of dragonflies. Frequency tagging is a technique used in human psychophysics and other non-human research whereby the contrast of visual features is modulated at different frequencies. By observing the frequency domain of the neural response, it is possible to identify the attended feature: if a feature modulated at 12 Hz is attended, there will be a strong 12 Hz response in the brain.

Despite the widespread use of frequency tagging in both human and animal research, it has yet to be applied to intracellular recordings of spiking neurons, such as CSTMD1. My Honours work focused on the development of an experimental paradigm utilising frequency tagging to identify the attended target based on a spiking response. 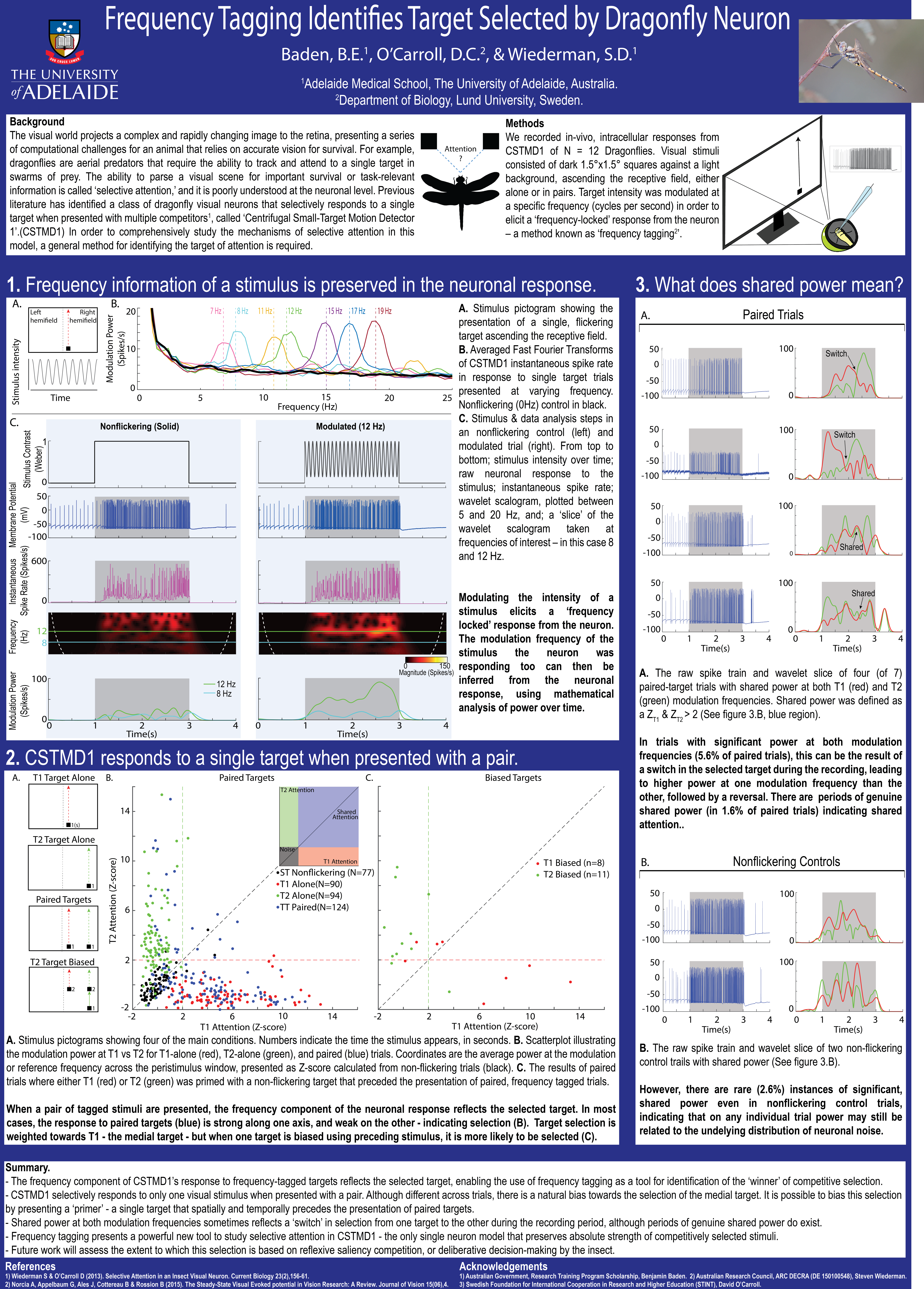